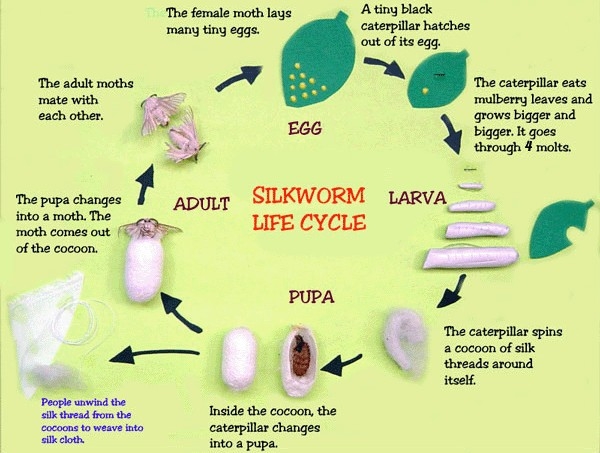 From this article you can learn about the Lifecycle of Silkworm

The Silkworm or Bombyx mori produces the commercial silk. It is the caterpillar of a moth whose cocoon is used to make silk. This insect is also called as silkworm-moth or the mulberry silkworm. Male and female moths are nonflying and lack functional mouth parts. The moths differ in morphological (specific structural features) features. The female has a larger abdomen and the male has a larger pair of antennae.

The life cycle of Silkworm demonstrates the most advanced form of metamorphosis (biological transformation). The metamorphosis has four distinct stages of development, completes one generation of the species: Egg (ova), Larva (Caterpillar), Pupa (Cocoon) and imago.

Egg is the first stage of a silkworm’s life cycle. The female moth lays eggs which is very smaller in size, as small as an ink dot. Female moth lays eggs on mulberry tree leaves alone, during summer or the early fall. The egg remains in sleeping stage until spring season arrives. The warmth of the spring stimulates the egg to hatch. The egg of Bombyx mori (silk worm) is very small and hard in structure; about the size of a poppy seed.  The egg shell gives a protective covering for embryonic development. When first laid, an egg looks light yellow. After few days, a fertile ovum darkens to a blue-gray.

The larva is an asexual stage where growth takes place. The larva or the caterpillar of moth, commonly called as silkworm, is host specific to mulberry. In this growing phase the larva molts 4 times. The period between successive molts is called an instar. The silk worm, upon hatching, is about 1/8th of an inch and much hairy.

Young new silkworms can only feed on tender mulberry leaves. However, during in this growth phase they can also eat harder mulberry leaves as well. The larval stage continues for about 27 days and the silkworm goes through five growth stages called instars. During the first molting, the silkworm sheds all its hair and gets a new smooth skin.

As the silkworm prepares to pupate, it spins a protective cocoon. The size and color of a cocoon looks like a cotton ball. The cocoon is built from one continuous strand of silk, perhaps its length is about 1.5 km (nearly a mile). This silk cocoon helps as protection for the pupa. Pupa is inside the silk cocoon. Cocoons are shades of white, cream and yellow depending on the silkworm genetics. After a final molt inside the cocoon, the larva (instar) develops into the brown, chitin covered structure called the pupa. The transformation (metamorphosis) is taken place inside the pupa results in an emerging moth.

If the silkworms are allowed to mature and break through the cocoon, the silk would be rendered useless for commercial purposes. So, in this stage, cocoon with insect is plunged into boiling water to kill the inhabitant and dissolve the glue holding the cocoon together. Finally the silk is collected from the cocoon by unwinding it with the help of a spindle. Here we get a single threaded silk without breakage.

Cocoon is the stage, in which the larva (instar) spins continuous silk threads around it, to protect itself from its predators. The larva traps itself inside the cocoon in order to pupate. The color of the cocoon varies, depending upon the species or what the silkworm eats. It may varies from white to golden yellow. The second molting taken place inside the cocoon, where the larva turns into a brown pupa. It takes about 2-3 weeks, for the pupa transforms to an adult moth.

The adult stage completes the life cycle of Bombyx mori or the silk worm. It is the reproductive stage where adults mate and females lay eggs. Moths are nonflying and lack of functional mouth parts, so they are unable to consume the food for their nutrition.

Once the adult moth comes out of its cocoon, its only purpose is to find a member of its opposite gender, and mate with it. Males are larger and more active than females. Males flap their wings rapidly to attract its mate. Within 24 hours of mating, the male moth dies, while the female lays plenty of eggs and then it also dies. From this stage onwards, a new silkworm life cycle begins.

Commercial purpose silk is made by boiling the intact cocoons and unwinding the single silk strand onto reels. Only a few moths are allowed to appear and to continue the population of silkworms. The rest are killed by the boiling water in their cocoons. The silk is degummed and whirled like other fiber. The resulting yam is very soft, cottony and light like a white cloud. This is the best silk for warmness and therapeutic use.

“Peace silk”, also known as “vegetarian silk” is raised and processed differently. The moths are allowed to appear from their cocoons to live out their full life cycle.