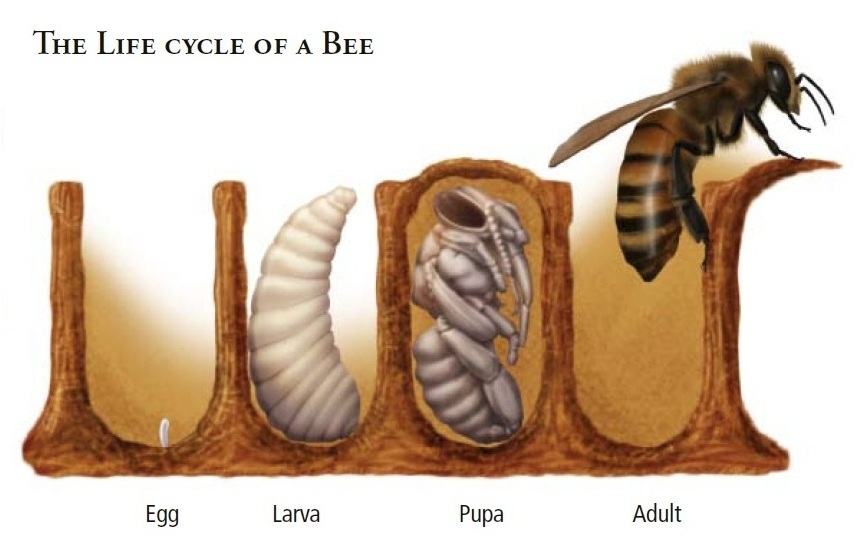 The life cycle of a honey bee is chronic. Each colony contains three adult categories: egg laying queens, sperm producing male drones and nonreproductive female workers. The only job of the drone is to mate with the queen bee during seasonal mating and soon after releasing their sperm, the drones will die. The life span of the worker honey bees are approximately six weeks whereas the queen bee can survive up to five years.

The first stage in the life cycle of the honey bees begins when an egg hatches. During the first stage of its development, the offspring form a digestive system, nervous system and an outer covering. Each member of a colony will develop as an adult over varying periods. The Queen bees will take 16 days to become a completely grown adult and the drones will develop within 24 days and the female worker bees need 21 days during the larval and pupal development.

The honey bee queen needs to lay plenty of fertilized eggs for the survival of the colony. The workers will search for food and they will build a strong and properly protected hive. They will also take care of larvae and protects the colony from enemies.

The queen examines each egg very carefully and then places the egg into a cell. The queen lays an egg within few seconds, and it can place up to 2000 eggs within a single day.When a healthy young queen lays eggs, she will pack them closely together within the cells. But when the queen becomes older, her sperm storage capacity will decrease. So she will produce only fewer eggs and the pattern of the eggs within each cell will also lack proper order. When the queen becomes impotent, again the new young queen will be raised and the life cycle process continues in the same manner.