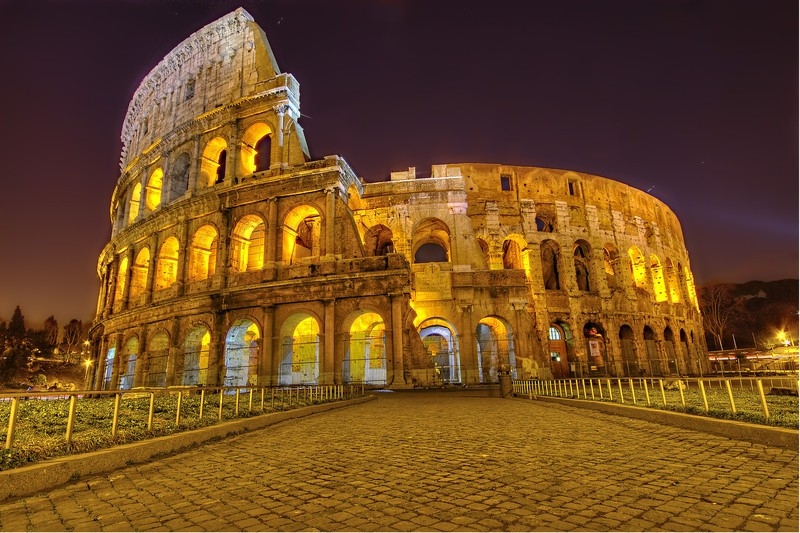 The Colosseum, was originally known as the Flavian Amphitheatre, It is a largest amphitheatre in the city of Rome.

The construction of the Colosseum was started around 70-72 AD and it was finished in 80 AD. The Emperor Vespasian was started the construction works of Colosseum and the Emperor Titus was completed. The Emperor Domitian made some alterations to the building between 81-96AD. It had seating capacity for 50,000 people. It was 156 metres wide, 189 metres long and 57 metres tall. It was the biggest amphitheatre built by the Roman Empire.

The Colosseum was first called the Flavian Amphitheatre or in Latin, the Amphitheatrum Flavium. This was after Vespasian and Titus who had the family name Flavius. For the name sake it was called as Flavian Amphitheatre. Theatre was used for gladiatorial contests and other shows like animal hunts, in which animals would hunt and eat prisoners. Gladiator is  a Man, often a slave or imprisoned, who was trained and armed with a sword or other weapon, and compelled to fight to death in a public arena (amphitheatre) against another person or a wild animal, for the entertainment of the audiences. There were also executions of prisoners, plays, and battle scenes; Sometimes theatre was filled with water to fight sea battles. The people of Rome could enter the Colosseum without any costs, it was free.

In the Middle Ages it was no longer used for performances. The purpose of colosseum was changed and it was, then used as housing, workshops, a Christian shrine and as a supply of building stones.

It is now collapsed due of earthquakes. The Colosseum is a symbol of the Roman Empire. It is one of the Rome's most popular tourist attraction. On Good Fridays, the Pope leads a torch light  "Way of the Cross" procession around the various levels of the amphitheatre. Colosseum was selected as one of the Seven wonders of the world, which added honor to Italy.

The Colosseum is shown to the tourists for five-cent euro coins used in Italy.